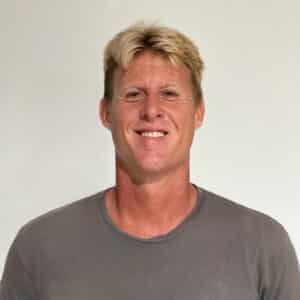 This was the first car I ever bought and it changed my life. I started camping and surfing in Baja every month, getting my first tastes of the adventurous Latin American surf life. I became hooked on the feeling of freedom and exploration that came along with cruising in such a ride. I’m still in love with surf vans, camper vans, roof-top tents, and anything else that gets me exploring and surfing off the grid.

I went to Germany this past summer and stopped by a VW dealership in Munich to check out the new VW California, a camper van with a pop top roof and all of the things that made the original VW Westfalia famous. These vans are pretty awesome, but definitely not as durable as the old-school 1980s Westy. Even though the VW California has AWD they just don’t seem rugged enough for Costa Rica’s backroads. They have low clearance, and lifting them seems silly. They’re nice, but they really are a highway camper van.

The 1980s Westfalia seemed like a better option. They’re rugged, they have higher clearance, and they have substantial weight over the rear axel which can help give more traction when traversing questionable roads without 4wd.

So I made it my goal to find a solid van in Costa Rica and do a custom build project. I figured this would be about the best Christmas present ever.

I was looking around online for quite a long time. I couldn’t believe how much used VW Westfalias go for these days. I guess people have figured out how rad these vans are. I found a few used vans in San Jose, Costa Rica, but they seemed to all be Vanagons or too old or in bad shape. A guy in Tamarindo had just driven down in a 1986 Westfalia, but he wanted to sell it for too much money, and it would have been too difficult/impossible to import anyways.

Bu then about a month ago I found what I was looking for, here in Costa Rica, already with Costa Rican license plates. Purchase price: $5600.

An original German 1981 VW Westfalia camper van that had been imported to Costa Rica from Germany a few years ago. It was sitting in a guy’s workshop outside of San Jose and hadn’t been driven much. The interior was pretty clean, it drove pretty strong (2.0L gas engine), but what sealed the deal was the original VW side decals which are totally rad!

Honestly, in Tamarindo it’s really hard to find a good mechanic. This is probably why I haven’t taken on a project like this down here. You’re only as good as your team. But so far, my new mechanic Diego and his team are doing a great job.

Before spending any money on upgrades and modifications, I needed to make sure the van is mechanically solid. There was a light oil leak, and the engine compartment was splattered with oil. We determined it was probably leaky engine seals, which it was. We had to drop the engine, replace all of the seals, adjust the valves, put it all back together again and pressure wash the engine compartment. Now the van leaks no oil at all.

I had seen some modifications on other trucks that Diego had done, and it all looked good so I took a shot.

We lifted the van about 3″. Then we built a solid bumper to house a 12,000lb winch and some additional LED headlamps. We replaced the 15″ rims with 14″ rims and added beefy off-road tires, which lifted the van a little bit more.

Here’s how it is turning out so far.

The van on the right is a 1980 Vanagon that I purchased for $1300 for spare parts. It has the same engine, transmission, suspension, accessories, etc as my 1981 Westfalia. I’ve already taken the rims, and I’m about to grab some door handles, window locks, and other small parts. This is definitely a cheaper and easier option than trying to find these parts in Costa Rica or buy online in the US and ship down here. Plus, you can never have too many VW vans!

I’m trying to get this van out of the workshop by the end of this week, so my short-term goals to complete right now include:

Last but definitely not least, I’m welding a small bracket to the frame of the van so I can attach my hammock from the van to a tree. Now you know where to find me!

And this is just the short list. I still need to fix the fridge and sink, replace zippers on the pop top canvas, and more. But it’s already ready to hit the road on a surfing adventure, so I’m stoked!

Feel free to contact me if you have any questions, advice, or are thinking about building your own ultimate surf van.

I’ll continue posting updates to the Talk Story blog about my surf van project as well as a lot of other really cool things going on down here (the concierge boat, opening a new production brewery, building Tamarindo’s first disc golf course, and more). Stay tuned to the Talk Story blog, I’ll be updating it every week.