How It All Began

We drove a school bus from San Diego to Tamarindo in 2001 to start the world's best surf camp... 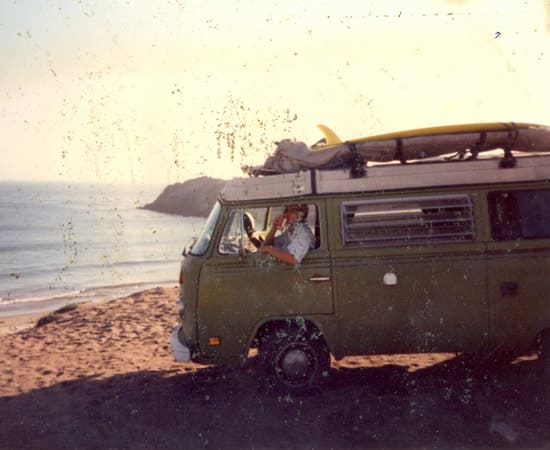 My name is Joe Walsh, I’m the founder and owner of Witch’s Rock Surf Camp in Tamarindo, and I’m here to tell you that if I can do this, you can do anything.

Ever since I was a kid, all I wanted to do was live on the beach and go surfing. This is a great dream in high school, but when you’re out of college and job hunting, there aren’t any job offers for “Surf Bum”. Perplexed but not deterred, I decided to build the world’s greatest surf camp, exactly the kind of place I would want if I was going on a surf vacation. This way I could surf forever and call it a job! The dream of Witch’s Rock Surf Camp came to life.

By January 2001 I had convinced 9 of my friends (including my dad and my girlfriend, now my wife) to join me and we drove a school bus from San Diego, California surfing all the way through Mexico and Central America, finally arriving to Tamarindo, Costa Rica a month later. We rented a shack on the beach that we could barely afford. We rented tents sitting on dirt with rocks and fire ants. We had good food and cheap beer. We had great vibes. But best of all, at a time when Tamarindo was tiny and we were considered to be “out of town”, we were sitting on Tamarindo’s multiple surf breaks located right out in front, having the times of our lives getting barrels and surfing our brains out.

In 2001 we drove a school bus from San Diego, California, all the way through Central America surfing Mexico and El Salvador, finally arriving to Tamarindo, Costa Rica a month later. We rented a shitty house on the beach that we could barely afford. With lots of hard work, we transformed our little piece of paradise into the world’s best surf camp ever! 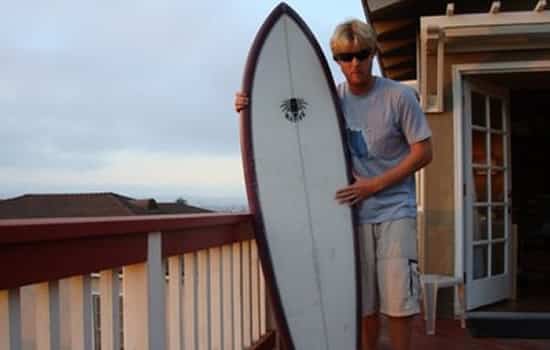 However you look at it, Witch’s Rock Surf Camp’s story is a unique one and should be told. So where do I start?

I started surfing when I was 16 years old. By age 19 I owned this 1978 VW camper van and spent at least one weekend each month surfing somewhere in Baja. All I wanted to do was explore and find great waves. I learned that I loved the Latin culture and that someday I might end up somewhere south of the border.
I traveled to Costa Rica when I was 20 years old for a month and a half. The water was warm, the people were great, and the surf was amazing. The idea of driving a boat to Witch’s Rock every day seemed like a pretty good idea. I figured I should go ahead and finish my college degree at UCSD before making the move.

Living on Poole Street and surfing Blacks was a great way to pass the time through college. I surfed on the UCSD surf team or I surfed with the friends I grew up with. I will always hold a special place in my heart for the La Jolla reefs, Scripps, Torrey Pines, and Sunset Cliffs. I got a job at UCSD driving buses, which I did when the waves were flat.

Then I graduated college and didn’t know what to do with myself. Moving to Costa Rica and opening a surf camp seemed to be the most viable option. PK (my dad) and Dave Ambler (my friend from childhood) wanted to be my partners. We pooled our money together and started preparing for the transition to Costa Rica. Buying a school bus to make the journey seemed like the right thing to do.

We drove this bus from San Diego, California to Tamarindo, Costa Rica. There were ten of us, including Holly Rice (now my wife). We surfed all of the way down through Mainland Mexico, checked out the ancient ruins of Guatemala, scored waves in La Libertad, El Salvador, and got in an accident with a semi truck in Honduras. It was an all-around surf trek through Central America. We ended up in Playa Coco, Costa Rica, during the first week of February 2001.

The one thing we forgot to bring on our surf trip through Central America was the title to our bus and trucks. Somehow we made it through each of the six border crossings between there and here. I’m pretty sure this is how I learned Spanish so quickly.

I am immediately reassured that moving to Costa Rica was the best thing to do. Warm water + epic waves = happy Joe. We find an old beach house in Playa Coco and start renting it. There were 6 bedrooms, we rented out 4 of them to guests. We bought a used boat and I became an immediate boat captain with no previous experience. I was forced to learn quickly.
On the morning of my first trip to Witch’s Rock and Ollie’s Point I am awake at 4am watching the movie Endless Summer II, looking for landmarks so that I might find my way to the surf break by boat. Everyone laughs when I tell them that story.

When I started WRSC, my whole plan was to drive the boat to Witch’s Rock so I could surf perfect waves as much as possible. Over the first couple of years we started becoming more and more established, especially after Mike Parise highlighted our operation in his book The Surfer’s Guide to Costa Rica.

I became busy, finding myself in the middle of surf camplandia. Everywhere in the US, the UK and in Australia, learning to surf became quite popular. Going to Costa Rica to learn how to surf became the most ideal vacation ever. I was driving guests to Tamarindo to teach them how to surf when I wasn’t driving boats to Witch’s Rock.

Tamarindo’s best learning waves broke out in front of an old abandoned beach house (yes, another one) next to the rivermouth. Witch’s Rock Surf Camp in Tamarindo was born.

We rented the house and turned it into a restaurant and bar. People camped in tents out in front or stayed in one of the “very rustic” rooms upstairs above the bar noise (where I now live!).

We officially opened the surf camp in Tamarindo the first week of October 2001. Tamarindo was a dirt road back then. We built signs across the front of the house to keep the dust out. Though we made some money from surf lessons and camping, most of our income was made by running the surf vibed restaurant and bar.

My partner Dave decides he is ready to move on to greener pastures. My dad and I become equal partners in the surf camp.
Our surf school program becomes more and more popular while we still keep a loyal following of limited surf tour guests. Through repetition we get better and better at what we do. People are happy and start turning into return guests.

We get enough cash to buy an old Suburban and begin surf tours based out of Tamarindo. My dad returns to the US. Holly and I try to run two surf camps at the same time, which was a total burn-out. We opt to close WRSC Playa Coco and place the future of our business in Tamarindo. Not many people can say they ever experienced Witch’s Rock Surf Camp in Playa Coco. We closed this surf camp in 2003.

After a couple of years of running the surf camp and reinvesting what we earned, things are starting to look a little less “Sanford and Son” and a little more like Poole Street from the college days. I’m not sure if that means it improved in appearance, but at least we had started to make some money doing what we loved.

My dad and I design what would later become known as the first phase of the WRSC Surf Resort, 12 hotel rooms. I know nothing of construction and literally go to www.askjeeves.com and ask Jeeves how to build a hotel in Costa Rica. 9 months later we have a 12 room hotel next to our restaurant.

Over the next couple of years, what started as a 12 room hotel project grew into an 18 room hotel, an extended restaurant, and a surf shop. We are now able to have our guests stay on the beach. I feel like this is a huge milestone.

National Geographic tells the world about Witch’s Rock Surf Camp. Natalie Portman stays with us and we teach her how to surf, as we do for dozens of musicians and celebrities. People tell their friends, which in turn tell their friends. Word of mouth and basically no advertising whatsoever keeps us full. Men’s Journal thinks I have the second best job behind Tom Brady of the New England Patriots. I fortunately get hurt less, so that’s ok with me.

Um, uhh… although I’d rather forget this ever happened, I do have to include it to show you exactly what happened up to this point. We drove a school bus to Costa Rica to start a surf camp, and four years later MTV wants to have us host their most popular television show ever. Too bad a few of the cast members were super lame. Our popularity among 13 year olds increases and my family reunions with extended family members will never be the same. You can view the episode here if you’re really that bored: www.spike.com/episode/16023?st=2773759

Offering the same service every day for many years makes us better and better at what we do. We are constantly keeping up with the growing demands of tourism in Tamarindo. 12 hotel rooms turns into 18 hotel rooms.

I have brief moments of thoughts of growing WRSC into a bigger hotel, but then I think about how that would change the vibe of the place and decide against it. I have become quite busy running the business as it is and the idea of more work for more money means absolutely nothing to me.

My parents retire and I become the only owner of Witch’s Rock Surf Camp in June of 2005.

High rises are being built all over Tamarindo. At one point there are 8 cranes visible from the beach. When we opened WRSC we were told we were “out of town.” I beg to differ that we are more in the middle of town these days. The days, months and years go by quickly.

Tamarindo’s uncontrolled growth leads to land and water pollution. WRSC builds one of Tamarindo’s only water treatment facilities beachfront next to our hotel. We start lobbying local government for more support.

The economic downturn sends all of the real estate speculators running for the hills. The community of Tamarindo bands together and finds ways to solve our own problems. The waves are fun and less crowded than in years past. What appears to be a crisis for others turns into the best thing that could ever happen to WRSC. I learn how to manage the surf camp without overbooking it. Everyone wins.

I move my family into the original beach house above the bar of the restaurant, staring at waves every day.

I get to surf more than enough, the purpose of moving here in the first place. I am always writing, building, or fixing something. I am meeting with managers, bankers, lawyers, or guests. When I’m not in Tamarindo running the surf camp I am out guiding surf tours to destinations in Central or South America. I am supporting my family through surfing, doing what I love. I am watching my boys grow up on the beach as they turn into little surf rats.
Life could not be better.