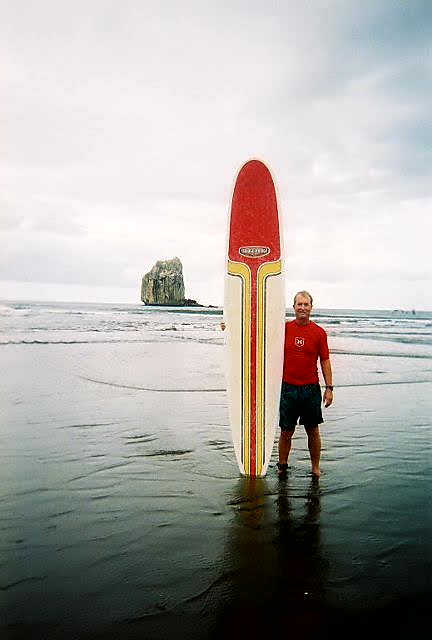 Last week we lost a surfing icon. Bruce Brown brought surfing in far away places right into your living room.  I remember going to Santa Monica Civic Auditorium to watch Endless Summer with Bruce narrating.  What a great movie!!

I grew up in Hermosa Beach, California in the early 60’s.  Hermosa Beach was the original surf city in the 60’s.  All the major surfboard shops were there, Bing, Jacobs, Greg Noll and Weber to name a few.  Some of the best surfers called it home, Nuuhiwa, Doyle, Purpus.  It was a great place to grow up.  Even Robert August was born in Hermosa Beach.  Surfing was my life until I graduated from high school in 1967.  Then, my mom informed my two younger brothers and I that we were moving to Texas, six hours away from the ocean.

Our new home, the town of Grapevine, Texas was a farming community of 4500 people.  Boy was I a lost soul for the next 37 years!! Surfing had mostly faded from my thoughts except for a few dreams.  In 2004, a friend told me he was a surfer and I acknowledged that I used to surf.  His reaction was “Yeah right.”

He had been to Witch’s Rock Surf Camp in Costa Rica the year before, once again made famous by Endless Summer II.  So we decided to plan a surf trip for the fall of 2004 (210 days and a wake up).   We lived by a lake so we started paddling our surfboards 5 or 6 days a week to get ready for our surf trip.

We headed out with four other friends that didn’t surf.  We arrived to an open air terminal with a grass roof.  Our shuttle driver was waiting for us.  There were nine people and luggage in this reconditioned van.  The road to Tamarindo was dirt with holes the size of truck tires.  It took a minimum of two hours to get to Witch’s Rock Surf Camp.  It was one of the bumpiest rides of my life.  We all checked in and then my surfer friend, Mike and I headed to the board cage. 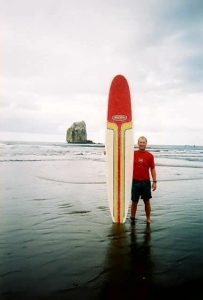 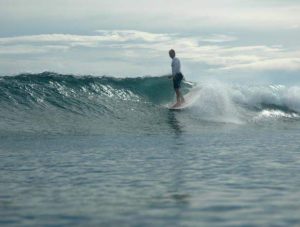 I was both anxious and nervous.  I knew I could paddle but it had been 37 years since I had stood on a surfboard.  As we paddled out I could see all levels of surfers so I positioned myself away to my little spot.  Suddenly I could see it heading straight for me.  I turned old “Big Red,” a 10’2” log, and before I knew it I was on the wave!!  I rode down the wave till it closed out and rode the white water to shore.  It was a moment I will never forget.

All my friends were on the shore clapping and waving.  The next day my buddy Mike and I were set to go to the legendary Ollie’s Point and Witch’s Rock, made famous by Endless Summer II.  Ollie’s was going off with overhead outside sets.  I met two surfers from Long Island who were in the shuttle the day before.  We hit it off instantly and set up the remaining days surfing together. 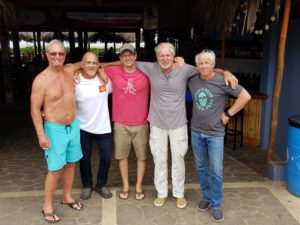 For the last 14 years John “Rico” Petrocelli, Ray Elihow and myself meet once a year at WSRC.  We have added a few more friends over the years from all over the US, Steve Kuhn from Oceanside, California, Jim and Danell Lytell from Florida and most recently Thomas Maltman from Long Island.  Our yearly surf trip is the only time we see each other during the year.  This one week out of the year is filled with laughs, drinks, new stories and old.  All friendships formed from the shared love of surfing. 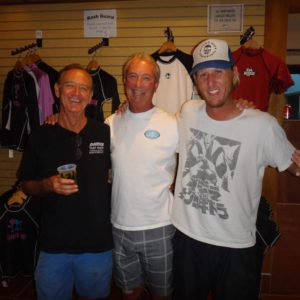 I have many great memories from WSRC. I recall going with Joe (the owner of WRSC) in his little zodiac searching for waves and almost capsizing.  There was an incident were two guys thought I was Robert August.  They bought me drinks and took pictures.  I told Robert and we had a good laugh about it.  Another time we had a van load of people coming back from Nosara when we were stopped by the federal police.  Myself and one other person were the only people with copies of our passports.  We were detained for well over an hour before WRSC convinced them to let us go.

Most memorable are all the friendships and families that I have seen grow over the years. Being part of the WRSC family has immensely enriched my life. As soon as you get out of the shuttle everyone is delighted to see you.  Witch’s Rock Surf Camp will always be my happy place!!  It’s where my life was jump-started through surfing again.

Kelly Slater was right.  Once you’re a surfer you’re done.