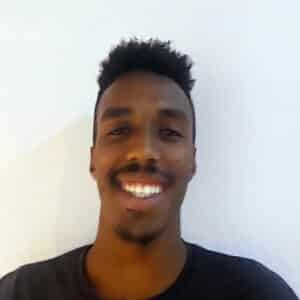 If you’ve called our 1-888-318-SURF hotline to make a reservation, there’s a good chance you’ve already met Lead Reservationist Daniela Ortiz. What becomes very apparent when you call is that Daniela is a super positive individual that really loves to help. When Daniela isn’t running the Reservations Office at Witch’s Rock Surf Camp, you can usually find her dropping into bomb waves somewhere nearby. We figured it was time to shed some light on the person behind the voice on the phone, so we caught up with Daniela to ask her a few questions.

Where were you born and where did you grow up?
I was born in San Jose, Costa Rica. I spent earlier years in Tarrazu, but then because of my dad’s job we moved to the south of the country in a town called Pérez Zeledón. I went to Cartago for college, which was cold! After that I moved back San Jose city.

How did you start working for Witch’s Rock Surf Camp? What is your position now?
I actually started working in reception at the front desk of the surf shop. I saw an ad, that there was an open position to work in the surf shop, I had just moved to Tamarindo and was looking for a place to stay, and it worked out. After a short while I was promoted to the Reservations Office, where I’ve now been for the past 3 years.

And why did you move to Tamarindo?
I was living in San Jose and my day was basically going on the bus for an hour, and then my job all day, and then back to the house on the bus for another hour. I grew out of it and realized I didn’t like it. I had a crisis and I wanted to change my career to something more related to nature or tourism. I applied for this job and was hired. When I started working the first day I was overwhelmed, and I quit in the same day! Then I went home and was like “what am I doing??” The next day I came back and asked for my job and they gave it back to me haha.

Did you come into your position with the skills needed to perform your job or did you learn them on the job?
I had to learn! I mean, I do think I am a shy person, but I am so willing to help which is basically what you need to do. I try to have a good vibe at the job and be responsible and problem solving. I did have to learn the surfing lingo and how to surf!

Can we talk about that wave you are getting barreled in?
I started surfing four years ago with a soft top right here at Witch’s Rock Surf Camp. I eventually transitioned to a hard board, a longboard. I slowly transitioned from a longboard to a smaller board, but it was not as easy as I thought it would be. I got frustrated but still I kept on going. I was joining the advanced surf tours with David. I remember being really scared but I would still go for it! And now I’m getting lots of waves and having a really good time out there.

What’s your favorite part of working at Witch’s Rock Surf Camp?
Okay, I’m going to say something really cheesy. I get really excited when I get to answer phone calls. And I get excited when I get to meet people at the camp and also hearing from them after their trip and that they were super happy about their experience!

Favorite time of year for Tamarindo?
I actually like the green season! May through August are a good example, the waves are pretty good and a little bit bigger. If it rains it can clean up and the conditions can get really nice. Another good time is November… I like it because it’s my birthday!

Favorite thing to order at “Eat at Joes”?
I like the nachos but I have eaten so many that I have to stop ordering them! I like the breakfast burritos in the morning, or I’ll get the gallo pinto.

Where is your favorite beach to surf?
Marbella during the dry season. Also Ostional!

Weirdest question to ever come through the reservations chat?
One guy asked me if he could find a wife in Costa Rica! I didn’t know how to answer that. It only happened once thankfully haha.

Witch’s Rock or Ollie’s Point?
Witch’s Rock! Because Ollie’s Point has been broken for a while now. Witch’s Rock is a totally different beach, it’s super strong. Once I got pushed to the ground by a wave and was stuck, it made me really scared! But still, it’s totally amazing there.

Besides surfing, what are your other passions?
I like to do yoga, it helps me meditate, and it’s the only time I’m not with my phone!

We’re super lucky to have Daniela as part of the Witch’s Rock Surf Camp family. If you have any questions or need anything at all, Daniela is always available to help! Give us a call at 1-888-318-7873, or click the chat box on the bottom-right corner of the screen, and Daniela (and the rest of the great reservationists at the camp!) will be more than happy to help you however we can. Pura vida!

After a hiatus lasting more than two years, competitive surfing in Costa Rica has f[...]

When Is The Best Time To Surf Tamarindo?

This may seem like a loaded question, but that’s because it is! Ask ten Tamarindo locals "when is th[...]

Hey there,It’s Joe from Witch’s Rock Surf Camp, how's it going? Have you been able [...]