The Relay and the Wipe Out 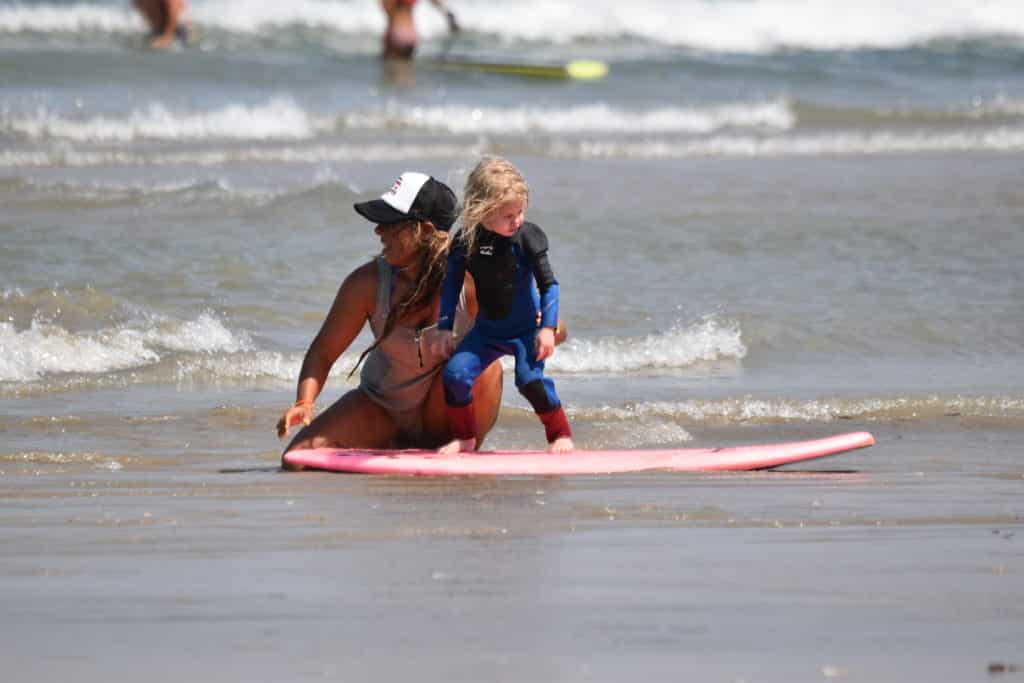 It was the last day of the trip and the instructors at Witch’s Rock Surf Camp had organized a relay for the students. It had been a good week. I graduated from beginner lessons to intermediate tours over the course of 7 days. I had convinced myself that I was a natural, ignoring the reality that I was a total novice and had actually surfed a total of 21 days over the course of the past three years.

One week a year, that’s how often we came to Witch’s Rock in Costa Rica. We wowed people with photos, our blond sun-kissed kids catching waves as tall as they were. They were 2 and 3 feet tall respectively, but it was still impressive to see these tiny groms with their confident stance cruising towards the beach all smiles. 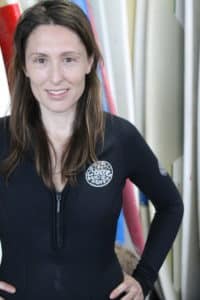 My husband, far more advanced than the rest of us, would take daily boat trips to catch big waves with the advanced surfers. In the afternoons, he would body surf with the kids. We love this little beginner beach we found and we decided this was our spot. Every year we come back to visit our friends in Tamarindo.

It was almost by accident that I acquired my own confidence surfing. I never intended to catch anything taller than I was. For me, surfing was just about having fun. But surfing feels incredible! When you get that first taste of the drop, it’s exhilarating. Then you’re back out there, fighting through the sets to get back to that spot, and tuck back into that perfect curl to recapture that freedom.

The week that led up to the relay was a good week. We had perfect weather. Perfect weather means perfect surfing conditions, just the right size waves rolling in, one after the next. We were all beginning to look like pros. There wasn’t a wave we couldn’t catch. As the week went on, the wind began to pick up, just enough that each day we had slightly bigger waves. That’s how I went from the beginner group to the intermediate group. 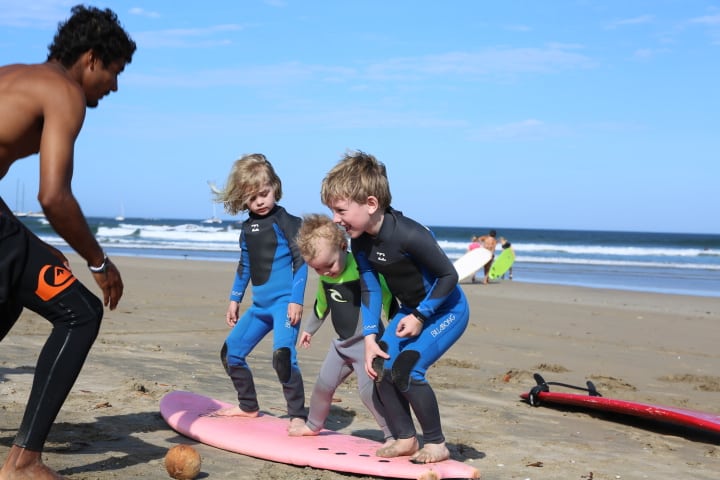 The day of the relay had arrived. This was a fun way to show off all the hard work we’d all done over the course of the past  week. The sun had just come up over the horizon, it was still cool, and the wind that had been picking up all week was really whipping across the water that morning. The sets were rolling in steady and the swells were big, six feet at least.

The head instructor blew the whistle; the relay had begun! I was towards the back of my group and I watched from my line up as the students tore out into the water one by one with their boards to catch a wave and come back. That was the drill, you had to catch one wave and not fall. If you fell you had to start over. If you succeeded you could come back into shore with your board and tag the next person on your team. This was supposed to be fun, but I had something to prove that day.

When the person directly before me came flying back in from the water and passed me her board, I took off like a rocket and paddled as hard as I ever had out into the ocean way past the break. The waves were strong that day and I really had to fight to get out there. I gathered up my courage and looked over my shoulder to see the swell in the distance. Before I had a chance to reconsider, the swell was under me, and I was paddling with fury. My arms were pulling like windmills at my sides and my body was stiff as a board. My eyes were squinting ahead to the shore. While the water closed around my sides I recited the basic rules in my head “don’t hang onto the rails, just straight up, no knees, get straight up and look to the shore, look where you’re going, stay low” and I push up with my hands. 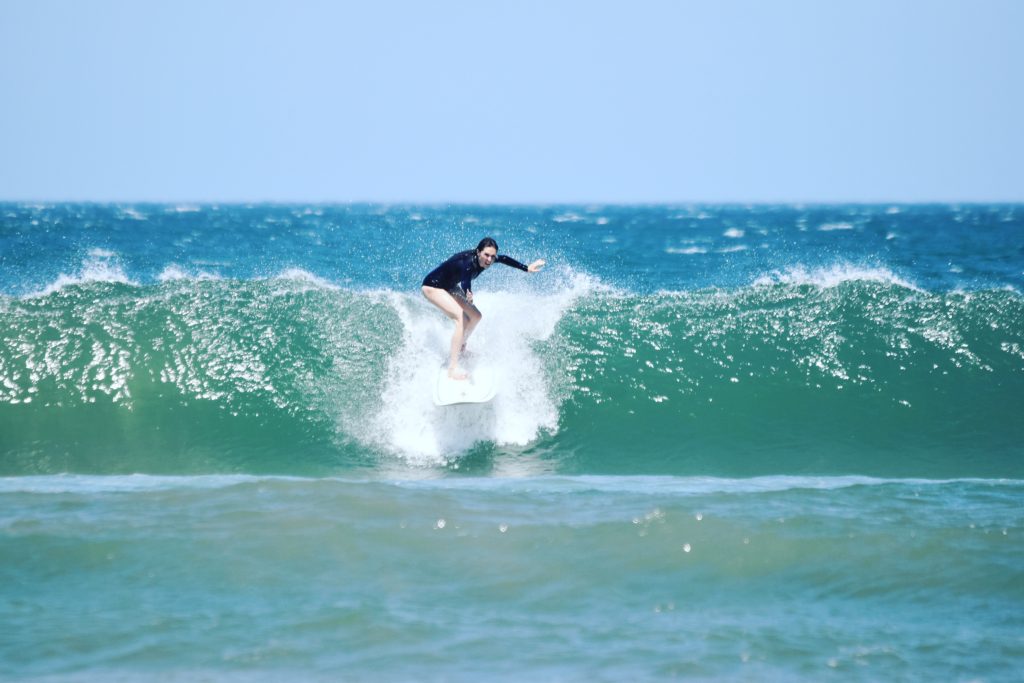 I can feel that I’m up and the board drops beneath me but it’s not “the drop.” I’m falling. The board is falling and I don’t know when it’s going to stop. I can feel myself tethered to the board and the board is flailing above my head, yanking me deeper and farther. I can make out faint glimmers of light. After what felt like an eternity, I managed to make my way back to the beach. I didn’t look back at the ocean much in those last hours we were in Tamarindo.

The next year we went back to Witch’s Rock. Back to our little oasis on the coast. The instructors remembered me, not only my instructor but all of them. “You’re the one with the epic wipe out from last year!” They would cheer and high five me, “We still show that video to people to this day!” I’d been dreading getting back on the board all year but my kids wanted to surf and I wanted to show them my courage. I went back out there, but rode the small breaks right by the shore where the water bubbles and swells gently. I no longer have anything to prove and now I really am just there to have fun. 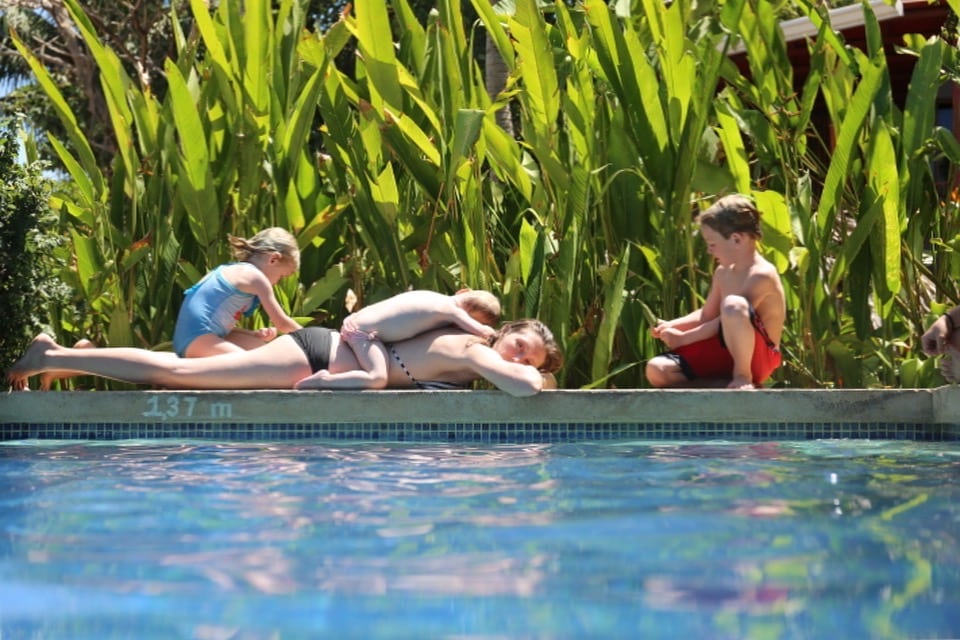 It was a great week and there weren’t any wipe outs. It took me almost all week to stand up on the board, but that’s ok. I could never have recaptured my love for the sport, if not for the positive and supportive attitude of the instructors at Witch’s Rock. We’ll be back this coming Spring for our 5th year at the camp, the kids talk about their instructors daily and about the fun we have around the property and in town, and I’m looking forward to another solid week of that pure life, something we don’t get much of anywhere else in our travels.​