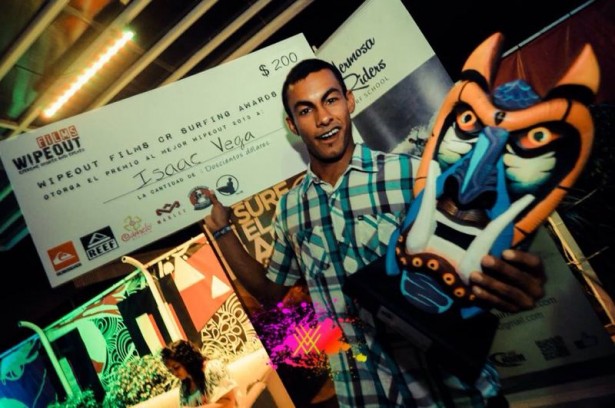 “You can’t make an omelette without breaking some eggs.” – The Joker

He’s one the kindest, most humble people you’ll ever come across. But when he’s surfing, Isaac Vega is nothing short of a beast.

As a mainstay on the country’s pro circuit, Isaac is known as one of Costa Rica’s top surfers and has been for some time now. Still, Isaac would be the first to tell you he’s no stranger to big wipeouts. Truth is, you don’t reach his level of ability or surf with his tenacious mentality without taking your fair share of lumps along the way.

One of Isaac’s heavier wipeouts occurred just recently at Playa Marbella here in Guancaste. Being that it took place during a contest, it was caught on film and made available for thousands to witness.

Eventually, he was even handed a big cardboard check for this one.

At the 2013 CR Surfing Awards held by Wipeout TV this past weekend in San Jose, it was announced that Isaac’s wipeout had been nominated, voted on, and overwhelmingly selected as Costa Rica’s Best Wipeout.

Here is the video of all the wipeouts that were nominated. Isaac’s comes at the 0:55-second mark-

Witch’s Rock Surf Camp is proud to be a sponsor of Isaac and his surfing career. We’re also proud to call him one of our surf instructors.

He has literally helped hundreds of people from all over the world to learn to surf, and puts as much time & energy into his teaching as he does his surfing.

Here’s a note that was sent to us from one of Isaac’s recent students as evidence:

“This is just a note to say thanks so much for the great surf instruction while I was there! Isaac is an incredible instructor!! On my own, I was not able to really enjoy trying to surf, but he showed me how to catch the right waves, how to position myself on the board, etc. and really showed me the FUN of surfing. Now I can’t wait to take another vacation and try it again! Many, many thanks, especially to Isaac.”  –Emily C.

So, congratulations to Isaac Vega. Thank you for charging as hard as you do. And thank you for being an exceptional human being. 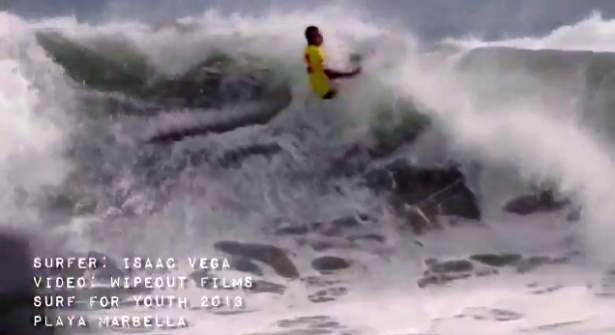