Every few weeks in Costa Rica, surfers are hyping about the newest purple blob that appears on the swell charts. “Have you seen the next swell? It’s gonna be the biggest of the year!”

Surfers love to create unrealistic expectations of waves we’ve yet to catch. We somehow think that Playa Grande will magically transform into Backdoor-Pipeline when the swell hits, but this hardly ever the case. So before you dust off your big-wave boards, make sure to consider all the details with each upcoming swell; most importantly, the Swell Angle

Just a quick refresher, most of the waves we receive in Costa Rica originate from broad areas of low pressure deep in the South Pacific Ocean. As these massive storms circumnavigate our planet, they are constantly pushing out wind and waves ahead of them. With the unique positioning of each storm, the resulting waves hitting the coast days later will have a corresponding swell angle. For example, a storm that forms off the coast of New Zealand will have a swell angle of 225° while a storm that forms off the coast of Chile will have a swell angle of 180°. And because these low pressure systems are moving from East to West across the Pacific Ocean, there is a wide swath of swell angles that gradually shift as the swell event happens.

Costa Rica is well exposed to almost the entire Pacific Ocean and can receive  swells ranging from 170° – 315° degrees. Something that many surfers overlook, however, is the small set of Galapagos Islands that sit roughly 900 miles offshore of Costa Rica and play a major role in swell shadowing. Here is how the numbers break down along the pacific coast: 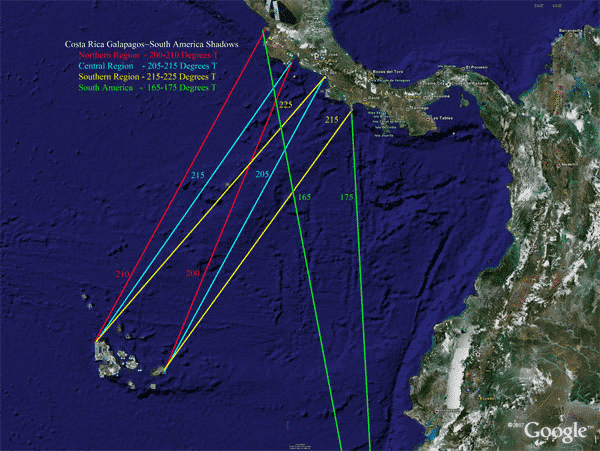 But what does “shadowed” actually mean? Will some beaches be completely flat while others are double overhead? Well, not quite. But according to the founder of Surfline.com, Sean Collins, “When the Galapagos shadow is fully in affect I would estimate it takes out at least 50% of the swell energy (swell height and wave consistency). As the swell direction will always range a little, there will also be waves approaching from the sides on the border of the shadow.”

Wow! A 50% loss in the overall size and consistency is pretty significant.. For us in Guanacaste, that means swells originating in this area below will be a bit of a buzz kill upon arrival. 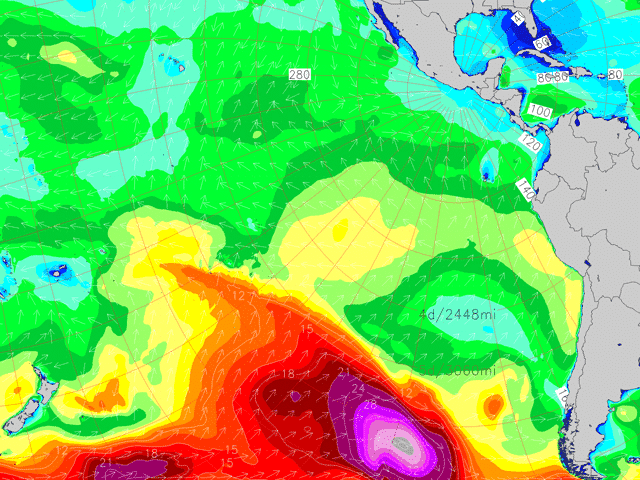 But isn’t this uncertainty what makes surfing so exciting?  Each new purple blob holds the possibility (if only in our minds) of catching the best waves of our lives. For me, this is what surfing is all about; being in tune with Mother Nature’s rhythm so we can be at the right spot at the right time.

See you out in the water!
Ryan Waldron